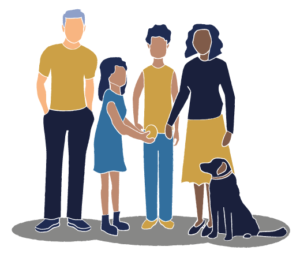 We have a story in our house that does all the describing required to understand the character of our youngest. Aged not quite three, she bumbled into the kitchen one afternoon and purposefully dragged one of our ludicrously heavy dining chairs from the table all the way across the floor to the cupboard where the raisins were kept. Oblivious to the presence of me and my husband she clambered onto the chair, arms and torso first, and teetered on the tip of her toes to open the cupboard door. Arm extended to the max she gave it her best shot before exclaiming in a slightly disappointed, but nonetheless resigned, voice to no one but herself:

And with that, she dragged the chair to the table again and bumbled back into the other room where a number of toy engines were waiting to take the plastic giraffes to the seaside.

A pretty cute image – but not without risk

You have to admit, that’s a pretty cute image and I remember at the time feeling delighted to have caught a glimpse of this tiny person’s inner world that was, briefly, not being controlled by us, her parents. But let’s just imagine for a moment that she had had the wherewithal to ask permission for such an activity… “Mum, Dad, would it be okay for me to potentially break some bones in a foot or two by dropping a chair three times my weight on them? Or maybe risk falling off the chair as I balance precariously on its edge in an attempt to steal some raisins from the cupboard? Oh and, just so you know, that might also cause a tin or glass jar to fall on my head.”

The drama of a failed attempt

Judging when to wrap around the cotton wool and when to cast it to the wind is a thankless and never-ending part of a parent’s job description. Our instinct is often to ‘just say no’ because watching the drama of a failed attempt unfold can be painful and – let’s face it – time-consuming (especially if it involves a trip to A&E).

It can feel as though we are constantly walking the tightrope of a) overprotective helicopter parenting and b) allowing our children the freedom to take risks, make mistakes, build resilience, learn lessons and all that blah that seems so right when they’re only three weeks old and the parenting books are still a novelty. And that’s before we’ve even considered the possibility of a tabloid headline that casts us firmly in the ‘Who the hell would ever do that to their child?’ mould. (I confess I have been known to make parenting decisions based solely on an imagined press hounding).

In order to teach them where the boundaries of safety lie, we do have to let them peer over the edge from time to time. But, in an ideal world, this is a slow, incremental process with the threat only of disappointment or a couple of bruises, not catastrophe. So, here comes the link – the rope that parents are expected to gradually slacken is there not only to protect our offspring from personal and physical danger, but from mistakes in all areas of life – including financial. And that, my lovely Readers, leads me circuitously to the topic of the Child Trust Funds.

Anyone with offspring aged between 8 and 18-ish will have received a £250 voucher from the government early on in the child’s life for one of these funds. The idea was to encourage a saving habit, which, to us and many other new parents at that time, looked like a good way of putting some money by to help with the future cost of university (tuition fees having not long since been introduced) or some other sensible, big-life-moment purchase.

Landing in the children’s laps

And so, for many years now, we have been dutifully dribbling some pounds each month into these funds without ever really believing that the children for whom they were intended would become walking, talking, living teenagers with ideas and desires of their own. In the frighteningly near future, a now sizeable amount of money is threatening to land in my children’s laps. There is to be no slow release of the rope. This will just happen.

I know full well I am not the first to say this, but I am nonetheless going to state the what-is-now-obvious. We, the parents, have done the sensible saving. We, the parents, have formed a very useful and tidy little saving habit, thank you very much. We, the parents, did this because we thought it would help us with costs that are likely to fall at our door in the future. But we, the parents, don’t actually get any say whatsoever in how this nest egg is spent. The scheme encouraged the parents to save so that, when their teenagers with their not-yet-joined-up brain connections turn 18, they can do whatever the hell they like with the money. Reckless? That doesn’t even cut it.

And here’s another giggle. From the age of 16, these children can make decisions about how the money is invested! As far as I am aware, at that tender age there is no requirement for them to have any actual experience of investment vehicles (let alone a provisional licence to drive them) but, nonetheless, this will be their right.

Women and children – behind the investing curve?

Now, if there is one thing that is coming through loud and clear in the investing workshops that I am running for women it is that we don’t feel that the investment industry has been talking our language and so we haven’t always been listening. The result of this is that many women are behind the curve when it comes to long-term finance issues. So, do we imagine that our children – who, at the best of times, find it hard to relate to anything that is older than the latest meme (and whose involvement in these child trust funds has not even extended to putting any of the money in, let alone understanding what might happen to it in the clutches of an investment manager) – will have the slightest idea what to do?

Taking advantage of the lack of emojis

I am happy to report that I am in no parenting quandary where this is concerned. We are a little over a year off the first 18th birthday but, when the time comes, I will be shamelessly helicoptering all over this one. I predict that when the correspondence arrives telling our first child how much money is about to be at her disposal (and make no mistake, I will be intercepting the post so that I am hovering in very close proximity when it is opened), the sheer lack of emojis on the page in front of her will be enough to make her lose interest in the detail and revert to us parents for help with the understanding.

My current thinking is that there will be three options for this sum of money – bearing in mind that it might be most appropriate to use a combination of some or all of them:

Maintaining a degree of parental control

Yes, it will be time-consuming both explaining and helping with the practicalities of whatever decision I make (sorry, she makes!), but that is the price we will have to pay if we, as parents, are to maintain a degree of control over this money whilst teaching some valuable life lessons along the way. Whatever we do, I am absolutely clear that it would be risky in the extreme to stand by while an 18-year-old drags a figuritive chair across the floor to reach the six or seven thousand pounds that we have been stuffing in a jar on the very top shelf for the all of their childhood in the belief that it will be used wisely.