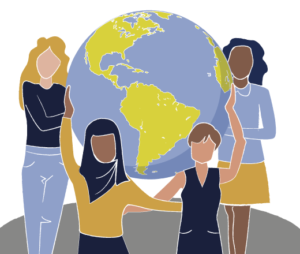 So, I’m starting to feel like I’m stuck in a permanent Sunday of my childhood where no shops are open (it was the seventies, you know) and you can’t call for your friends because we are all supposed to be having family time. Even a Groundhog Day scenario seems appealing right now – what with its community gathering and small-animal excitement. So quickly have we become conditioned to the new rules of (dis)engagement that a friend told me she had found herself accidentally social-distancing from her husband in the kitchen. I questioned the “accidentally”.

The answer to the question ‘how long we can go on like this’ is, for now, ‘however long it takes’. Flippant references to the boredom of seeing the same old faces day in day out are not intended to downgrade the gravity of the situation which, for many families and individuals, is unimaginable. But if we cast our minds back to just before all this happened, to the devastating fires on the other side of the world and the equally devastating floods in our own back yard, we might recall that we were posing the very same question – and getting a very different answer.

Scientists and activists alike have been questioning the sustainability of our ways of life in the developed and developing worlds for decades now. In more recent months and years, a concern about what we are doing both socially and environmentally to ourselves and the planet has surged into the mainstream and swept sections of the population from school children to pensioners up in its wake. Maybe it’s the contrast of the eerie quiet that is now descended upon us, but, in my mind, the voices shouting that this was not sustainable had become deafening.

Powerless under the flight path

Nonetheless, wholesale change can seem elusive. The age-old problem of individuals feeling powerless in the face of giant corporates and policy makers is rarely addressed by demonstrations and strikes alone. I live close to Heathrow and the fruitlessness of forsaking the car in favour of walking so as to ‘do my bit’ while the aeroplanes above spew out kerosene and carbon dioxide like nobody’s business can be a little overwhelming.

Investing for the power…

Could investing be the answer? At its essence, investing is handing money over to companies that you think will be financially successful in return for a slice of that success. Little people like you and me might invest on relatively small scales; but the majority of us will look to invest in funds, which is a way of pooling our resources. One benefit of this is that you get a better spread of risk – you are not putting all your eggs in one basket because the fund chooses lots of different types of investment to protect you from individual failures. The other advantage is that you become – collectively – more powerful.

…to change the world

When you have money to invest (whether that is paying into your workplace or personal pension; a lump sum because of a bonus or inheritance; or just putting some pounds a month into a Stocks & Shares ISA) you can – if you want to – choose funds that invest in companies that are trying to change the world. This choice has been evolving in recent years. If we go back to the seventies and eighties again, ethical investing – as it was known then – mostly meant keeping your money out of companies that did ‘bad’ things. Armaments, tobacco, alcohol, gambling, pornography, that sort of thing. Negative actions were all the rage then: it was the era of boycotting, sanctions, signs telling you what you must NOT do, being sent to your room…. These days there is more emphasis on rewarding the positive.

And to take the ‘pooling our resources’ argument up to the ultimate notch, let’s consider the value of investments in all shares and bonds, which, pre-virus, was close to $200 trillion. Today’s number will be different, but let’s just say it’s definitely a lot. Compare that with the ‘mere’ $5-7 trillion estimated to be the cost of attaining the UN’s 17 ‘Sustainable Development Goals (www.un.org/sustainabledevelopment), which aim to address global challenges such as zero hunger, responsible consumption and production and gender equality. Companies selling solutions to the obstacles in the way of those goals require investors to back them so that they can expand their positive impact on society, civilisation and the planet as a whole. This looks to me like something that the little people can do to actually make a difference.

Companies cleaning up their acts for a brighter future

I’ve been attending presentations and doing research into investment managers who run funds and portfolios that invest solely in companies that are doing business in a responsible and sustainable way – and I, for one, am keen to find out more. There is an increasing number of companies recognising that profitability and sustainability are going to be best friends going forwards. Small, new companies are innovating while bigger, older companies are cleaning up their acts in a bid to attract staff and customers alike in a future that cannot keep going in the ways of the past. Now, more than ever, there’s a need to be inspired by the hope of a brighter future.

What about women investors?

So, over the coming weeks I plan to showcase stories in a series of mini-blogs about the companies that are taking a responsible course towards profitability. I just want to put in a word about women investors here. There are many who want to assume that a ‘feminine’ outlook on the world will naturally lead women investors down this path. And indeed, a policy paper from the UK government’s Department for International Development in 2019 (“Investing in a better world”) found that the groups most interested in having their savings and pensions managed in a way that takes into account the impact on people and the planet were: millennials; those with assets over £25,000; and – you guessed it – women.

Do non-investors have a more open mind?

But I would argue that there is much more going on here than femininity. A more recent survey by Boring Money (www.boringmoney.co.uk) identified a group of ‘savers’ (as opposed to ‘investors’) of unspecified gender with an average age of 40 and assets of over £10,000, and found that a proposal to “Invest in a portfolio of mainstream shares with zero exposure to tobacco, weapons and fossil fuel” was more likely to appeal to them than to people who already hold investments. In other words, these non-investors were more keen on taking an ethical stance than existing investors. Could this mean that, if you are not already an investor (and the majority of women aren’t), you have a more open mind to what the world of investments has to offer?

Knowing to ask for something different

This is my thinking: if it is really the case that interest in sustainable investing is higher in women than men, this might in fact be because it is not yet seen in the investment industry as a ‘mainstream’ choice. As with all non-investors, their lack of experience probably makes such women less susceptible to anchoring on the established bedrock – unbiased by notions of what is normal. As women are more likely to be savers than men (who are more likely to be investors), there will be more of them in this group. It is perhaps their non-investor status – rather than their gender – that is the influence here.

And when someone crosses the line from being a non-investor to an investor and puts themselves at the mercy of other people’s expertise, it could be that a herd instinct kicks in along with the old safety-in-numbers mindset. If a finance professional presents the ‘mainstream’ to you, you’re probably going to go with that. Unless, that is, you know to ask for something different.

Dropping the ‘niche’ from sustainable investing

This is where financial advisers and consumer investing websites come in. As we look to bring more women up to speed on providing for their futures – as well as men who are new to the idea – I see it as being up to us not to just sleepwalk unquestioningly into the established ways of doing things. And that includes considering all the investment options on the table without sidelining sustainable investing as something that is ‘niche’. If anything, we should be aiming for a world where the niche is in ‘non-sustainable’ industries, not the other way around.

For those interested, I’ve put some explanations (this is the investment world, so there’s going to be jargon…) in the ‘A bit more understanding’ section. Meanwhile, my favourite and most relevant of all the ‘silver lining’ stories out there is that China has put a strict ban on the eating and farming of wild animals since the outbreak of Coronavirus. I think the pangolins will agree that this is a step in the right direction when it comes to sustainability.

·       Sustainable investing means using your money to invest in companies that are a) making a positive impact on the world in terms of society and the environment and b) not doing things that are harmful to the world or its population.

·       Older style ‘ethical’ investment funds merely eliminated companies that were engaged in controversial activities but did not ‘reward’ those taking a responsible approach to their businesses.

·       In addition to funds, investment managers are now offering portfolio services where the ‘universe’ of funds from which they choose their investments must comply with their stated sustainable standards – as well as following a particular risk profile to suit different clients.

·       Many providers also adopt what they call a responsible investing policy through all of their investment processes (not just in funds or portfolios that have ‘sustainable or ethical’ in their name). This is where investment managers seek to use the ‘power’ of the money entrusted to them both in terms of the companies and funds that they invest in and in terms of using their voting rights to hold companies and their management to account on a number of environmental, societal and governance (ESG) issues.

·       Examples of governance issues would be paying directors and staff responsibly, not seeking to avoid tax payment, transparent accounting and best-practice management

Funds: Investment funds (also known as collective investments) pool an individual’s money with other investors’ money so they can have a good spread of investments. A fund might have a structure known as a unit trust, an investment trust or – most commonly – an OEIC. The differences between these are mostly to do with the way they are set up and some of the legal aspects of that. You can happily think of them all as funds and be none the wiser.

Portfolios: An investment manager – or sometimes a financial adviser – might build a collection of investment funds to form a portfolio. This collection would typically be built to match an investor’s attitude to risk.