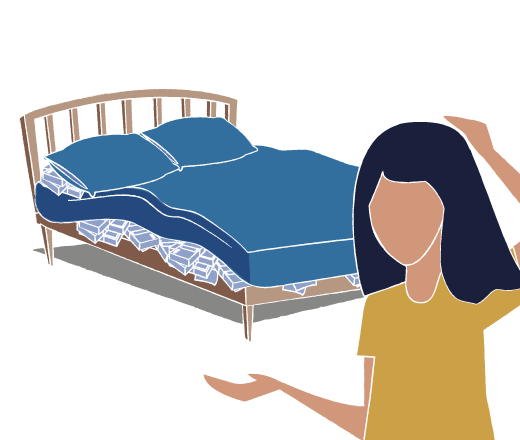 A headline on the BBC news app stopped me in my tracks on my dog walk the other morning (I know, I know, bad owner, not focusing my full attention on the hound. She was busy sniffing, Your Honour).

“All new doctors to get training in Women’s health”. What the what? Beg pardon for assuming that women would be included in the group of people who have access to medical treatment. My bad, apparently.

Designed by men, for men

Later in the day, the headline had been changed to “Plan to stop ‘sexist’ NHS treatment”, which makes the point far more effectively and restored the BBC to its long-established place in my mind as a reputable news channel. Yet it was that first headline that really stuck with me. In just a few words, I received the message that our health service was designed by men for men. Women, it seems, being an inconvenient aberration. And that drew me in.

We all know that headlines are – by their very nature – intended to capture our attention. A headline is a commercial Siren call promising something interesting – but often leaving you marooned in a story bearing little relation to what you thought. And the closer to your heart a topic is, the more likely you are to be ‘caught’ by a headline that can feel as though it has your name on it.

Money is a headline winner

Money is a topic that speaks to all of us and for this reason lends itself well to capturing an audience. Anything that implies that we will better off if we read this – or worse off if we don’t – is a headline winner. But its universal appeal can leave many of us vulnerable to a soundbite or headline that doesn’t give the whole story.

We are all vulnerable

I was asked recently to be a guest on a podcast about vulnerable clients. The regulator of financial services (the FCA) has a lot of really good rules around how everyone working in the finance industry should be mindful of customers who might for any number of reasons be at risk of harm in the hands of someone unscrupulous. We chatted about what vulnerability is and how financial bods should approach it and I kept coming back to the point that we are all vulnerable in all walks of life to the knowledge we haven’t acquired, the experiences we haven’t gained and the expertise that we don’t have.

I found myself making a comparison between a client seeking financial planning advice and a builder coming to quote for repairs on my roof. In the latter situation, I am vulnerable to the fact that I can’t get up on my roof easily, that I wouldn’t be able to spot the problem even if I could and that I would still less know how to fix it, how long it would take or how much it would cost. I might as well have a sign round my neck saying “Charge what you like – I really haven’t got a clue!”.

When we lack experience in something, we are naturally at the mercy of the people who do. Which is precisely why the FCA is concerned about consumers being treated fairly – no matter what their understanding or capability.  I was mindful of this when I spotted another headline on a different website that claimed:

The cost of inflation

Alarming! (Especially if you don’t even have £4,000 in a cash account). What prompted this was the most recent inflation rate hitting 9.4% in June, as calculated by the Office for National Statistics (ONS). This means that the cost of things that the ONS judges that we regularly buy and pay for was 9.4% higher in June this year than in June last year.

The £4,000 “loss” from the headline was worked out on the assumption that you have £50,000 in a cash deposit account and that inflation stays at 9.4% for 12 months. On this basis, if you were to try next June to buy all the things in the ONS basket that you could buy this June with your £50,000, you would need around another £4,000. That was after taking account of the bit of interest that you can currently get in a cash deposit account over that year (they chose a rate of 0.65%).

I don’t want to knock the headline too much. After all, it is a staple of financial planning to understand that – over time – inflation will gnaw away at the value of cash savings. And when you are looking at a long-term savings plan, the effect of inflation on your money is not something you should ignore. If you want your savings to have the potential to keep up with inflation over the long term, the alternative is to invest the money in stocks and shares and the like. The theory is that, if you are investing in companies that make things and provide services, those companies will be able to put up their prices with inflation and their profits shouldn’t suffer as much as your cash savings. And as the company’s profits grow, so should your investment returns.

However. Investing does not come without risk. If you knew that you would have to buy all those things in a year’s time, would you take the chance that the stock markets will deliver the 9.4% return you need to combat the effect of inflation? Or would you think this was too risky in such a short space of time? What if the markets fell by 9.4% instead? Then, not only have you not offset the effect of inflation, but you have lost a load of money as well if you were to cash your investments in at that point.

The loss can be real

Whether to invest your cash savings or leave them to the mercy of the inflation mice is a decision that needs to go deeper than the headline. Let’s just say that inflation did remain at 9.4% for the next 12 months (which we can’t know, by the way); and that the cash savings rate remained at 0.65% (unlikely – if inflation were to stay that high for that long, it’s probable that interest rates would go up further); and that, again, you definitely had to spend all your cash savings on precisely the things that the ONS looks at to calculate the inflation figure. In that case then, yes, that £4,000 “loss” is real.

How much flexibility do you have?

So, what to do? I think you would need to ask yourself, can I live with the fact that I will be buying £4,000-worth less of stuff with my money in 12 months’ time or shall I take some risk? The answer to that lies not in the numbers but in the degree of flexibility that you will have in 12 months’ time. In short, if you have no flexibility and the £50,000 savings are your only means of buying what you need in 12 months, then investing is probably a risk too far and you might just have to resign yourself to buying a bit less. If, however, you have other wealth – or can postpone your spending until the stock markets turn a bit friendlier – then there can be an argument for taking some investment risk to try to offset the negative effects of inflation on your savings.

So much contemplation from one headline!

I wonder if the person who wrote that headline had any idea it would cause so much contemplation? Anyway, no time to think about that as I have to make an appointment with the GP about my dog. What? GPs don’t get training in canine health? Outrageous.