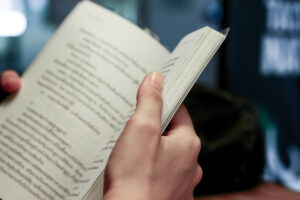 Often, when trying to get back into the habit of reading, starting a new book can be the most daunting step. But with the National Library of Medicine research suggesting that reading for pleasure carries countless benefits, such as preventing age-related cognitive decline and giving you a greater insight into human nature, it is a worthwhile venture.

Since the average reader can finish a 200-page novel in just under six hours, here is a list of 10 bite-size stories that you can finish in a day.

This short horror novel follows Marina, a seven-year-old girl who is placed in an orphanage after an accident that wounds her and causes the death of her parents. As the other girls begin to ostracise her, Marina proposes a game of horrifying violence in her desperate attempt to feel like a part of the group.

Barba’s exploration of childhood innocence through beautiful, lyrical prose creates the perfect horror novel that promises to haunt you for days after finishing it.

Murata’s title sums up her contemporary novel perfectly: the story recounts the life of 36-year-old Keiko Furukura, who has been working at the same branch of “Smile Mart” for the last 18 years. After being an outcast for much of her life, Keiko enjoys knowing the rules of social interaction – all written down in the staff manual – and finally feels like she fits in.

However, when the people close to her try to pressure Keiko into starting her own family and pursuing a different career, she is forced to take drastic action.

This ironic, deadpan exploration of modern work cultures and conformity tells a brilliant story with an unusual yet charming heroine, and Murata’s dry sense of humour promises to provoke a chuckle while you are reading it.

Arguably Fox’s best-known novel, Desperate Characters tells the story of a woman who may or may not have rabies. Set in a rapidly changing neighbourhood in late-60s Brooklyn, the novel begins with Sophie Bentwood being bitten by a stray cat, and she and her husband’s misfortune only escalates from there.

Fox’s ability to create such complex and unfortunate characters combined with her tense, fast-paced writing style conveys the paranoia of its protagonists as their lives fall apart over a single weekend.

Her masterful writing has been heralded as “the greatest realist novel of the post-war era” and promises to fill you with a sense of delicious unease as she explores themes such as gentrification in New York and Sophie’s infertility.

Yeong-hye lives an unremarkable life until the nightmare. Terrified by the brutal, grisly images that plague her, she decides to throw away all the meat in her freezer – a choice that will have consequences she could never dream of.

Han was the first Korean author to win the Man Booker International Prize in 2016 for her tale of rebellion in a society that expects compliance. Yeong-hye’s decision to be a vegetarian is the only constant in this novel, as Han takes you on a horrifying journey of defiance that will keep you up at night.

A Pale View of Hills was Nobel Prize-winning Ishiguro’s first novel, which revolves around Etsuko, a middle-aged Japanese woman who has started a new life in England, and the death of her daughter, Keiko.

This historical novel carries a personal tone, as Ishiguro experienced many of the same cultural shifts as his protagonists when he moved from Japan to the UK at only five years old. His delicious slow-paced writing and intriguing narrative will provide you with an excellent source of relaxation this summer.

The 12th expedition into Area X is undertaken by four women: a biologist, a psychologist, an anthropologist, and a surveyor. The women are trained to expect the unexpected as they venture into the forbidden land to solve the mysterious deaths of their previous counterparts, but the secrets they are keeping from each other are what will risk their chances of survival.

VanderMeer takes common science fiction cliches – alien invasions, ominous spores, and extra-terrestrial biology – and sculpts them into a brilliant narrative that seems doomed from the beginning. His exceptional writing causes the tension to grow with every new sentence, filling you with a sense of unease that forces you to turn the page and find out what happens next.

And if you enjoy the novel, you may also like the 2018 film adaptation of the same name, starring Natalie Portman, Tessa Thompson, and Oscar Isaac.

Amorality can be found on every street corner in the 1920s New York that Fitzgerald describes, but Nick Carraway has not moved to the East for the wild parties and illicit career options. There is, however, an exception to his unwavering morality: Gatsby, his mysterious neighbour whose “endless capacity for hope” will not be stopped by something as simple as logic.

The novel has become an American classic that sums up the “Jazz Age” of New York through its critique of the American Dream and inclusion of important topics such as social and gender inequality. Fitzgerald’s wistful passages have remained relevant for almost a century after they were first published, so this exemplary novel is definitely worth your time.

8. This Is How You Lose the Time War by Amal El-Mohtar and Max Gladstone (208 pages)

It starts with a simple letter: “Burn before reading.” Two time-travelling agents on opposite sides of a war for a dying planet begin exchanging letters – taunting, at first, but gradually they begin to realise that they have a stronger bond with each other than they do with the causes that they kill for.

El-Mohtar and Gladstone’s collaboration creates a fantastic setting in this science fiction novel for the epic, star-crossed love story between the two female protagonists. Equally exciting and romantic, this narrative plays with time to deliver a beautiful tragedy that you will want to reread the moment you finish it.

After moving into a new house, a young girl finds a small door that leads to a different world. Coraline, the eponymous heroine of the novel, is convinced that this “Other World” is all her dreams come true, but it doesn’t take long for her to realise that not everything is as it seems.

Although Coraline was marketed as a children’s novel, many people agree that the horrifying descriptions of the “Other World” and the people who reside there are too scary for younger readers.

Gaiman famously had to show the novel to his co-worker’s daughter to prove it was suitable to be published as a children’s book. She gave it her approval, however, she later admitted that it terrified her – she only lied because she needed to know what happens next.

Every night since his mother first fell ill, Conor has had the same dream. One night, at precisely seven minutes past midnight, an age-old creature visits him, promising to tell him three stories in exchange for the most dangerous thing of all: the truth that Conor has been hiding.

Ness perfectly blurs the line between fantasy and reality through the Monster’s three fables, exploring Conor’s heartbreak and grief with beautiful prose, accompanied by gorgeous illustrations by Jim Kay. You will struggle to read this novel – or watch the 2016 film adaptation – and get to the end without shedding a single tear.