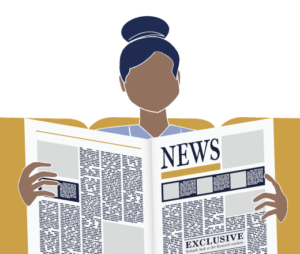 Number two in the series on Investing Biases: Carole notices that she is noticing things differently since taking a course on financial abuse and is on the look out for Confirmation Bias – something that investors can also fall prey to…

Choosing what to take notice of

You know how when you hear a new word for the first time and then it crops up in everything you read? Or when you find out you’re pregnant and suddenly everyone around you is sporting a bump? Neuroscientists better than I (that will be 100% of that particular population, then) would likely tell us this is because the world assails our senses in such an overwhelming way that we have to subconsciously ‘choose’ what to take notice of. We didn’t notice that word or those pregnant women before because they weren’t of interest to us. But now that they are, we can’t stop seeing them.

This is a phenomenon that is on my radar right now. A few days ago I signed up to a course that will certify me as a Financial Abuse Specialist*. That very day, a news article appeared that declared that four in ten of us keep money secrets from our loved ones. Now, if I’d seen that news the week before I would have homed in on what was reportedly the most common form of ‘money secret’ – namely, the debt that people hide; with credit cards and undisclosed loans making up a joint 60% of such secrets. And I might have used the numbers to illustrate how important it is for all members of a household ‘team’ to have oversight of the finances.

The need for an ‘escape’ fund

But in this instance I took more notice of the 21% who declared a secret savings account. Having just listened to a couple of harrowing case study accounts of previously successful and wealthy women who had found themselves reduced to positions of complete powerlessness because of an abusive relationship that stripped them of their financial independence, I found myself applauding the secret savers. I am lucky enough to have never felt the need for an ‘escape’ fund. But many people (the majority – but not all – of whom are women) do.

Financial abuse was in my head

So here’s the thing. I applauded the secret squirrellers because I had been thinking about financial abuse. Financial abuse is when someone illegally or without permission uses someone else’s money or property for themselves and can, in extreme cases, lead to the victim losing all their possessions, their home and their physical and mental safety. Rather than taking the position of advocating transparency around money within relationships, I projected the idea that the secret money was a means of getting out of an abusive relationship and was therefore a good thing. I did this because that was what was in my head at the time.

As an adviser, what should be my position here? When I come across a couple where one of them holds all the joint money in their sole name should I automatically assume shenanigans? Where a single person of some wealth is about to throw their lot in with a penniless pauper, should I suspect foul play? In other words, will my heightened awareness of the serious issues around financial abuse make me see it everywhere – even where it is not?

A form of Confirmation Bias

What I am describing is a form of Confirmation Bias. In the world of behavioural finance, this can lead investors to seek out information that backs up their own ideas or beliefs about the stock market or an individual investment. In doing this, they ignore information that might provide an opposing – or more rounded viewpoint. For example, someone who believes that the risks involved in investing in shares always outweigh the potential benefits will take more notice of a stock market in free fall than one that is flying high. Someone who believes that it always right to buy company shares that are looking cheap will ignore the reasons why they are cheap (the company might be on the brink of collapse, for example) and only ‘see’ the numbers. Someone who likes chocolate will ignore all evidence of it being bad for them but then pounce on the news that it might, on certain days with a following tailwind, have some health benefits as yet undiscovered (okay, so that last one isn’t strictly speaking related to investing…).

An inexperienced investor – or complete newbie – may well have a number of confirmation biases in play and these can lead to poor decisions or, perhaps more likely, indecision. Fear of the unknown can make us dig our heels in, especially if we feel that otherwise we might quickly get out of our depth. When approaching a new topic – especially one like investing with all its jargon and complications – it can be a good idea to write down everything you think you already know about it and then deliberately seek out some opposing views (from reputable sources, natch). It’s a first step to opening ourselves up to new possibilities and, in some cases, to avoiding the risks associated with doing nothing (something I talked about in Will you behave: Overconfidence bias).

So, I’ve been giving this some thought in relation to financial abuse. How can I be alert to its possibility when talking to clients without projecting it onto situations where it doesn’t exist? What if, following completion of this course, my confirmation bias raises the alarm every time I hear of an inequity within a family situation? Or leads me to entertain a scenario – no matter how unlikely – where the wellbeing or security of a client could be threatened? Or what if I get it into my head that the actions of the client are threatening the wellbeing or security of a different family member?

After a bit of soul searching, my conclusion is that it shouldn’t necessarily be a problem if I start to see this everywhere. What matters is that I remain aware of my own biases and open to alternative possibilities, whilst all the time checking that no-one’s best interests are being undermined. I reckon that if I stick to the tried and tested process of getting to know a client really really well without making any assumptions or bringing any of my own personal beliefs to the meeting, I should be able to steer the way through to a path that is right for them. And if there is a difficult conversation to be had – well, that path will be open too.

Always act in your own best interest

Getting acquainted with all the facts – not just the ones we think we know already – is a good way to counter any confirmation bias and keep an open mind. When making decisions about what to do with your money – especially if investing is out of your comfort zone – the first question to ask is ‘Do I have enough information to act in my own best interest?’ And the second question? Well that’s easy – it is always, no matter what the first question is ‘Who will tell me that 100g of chocolate a day is good for me…?’